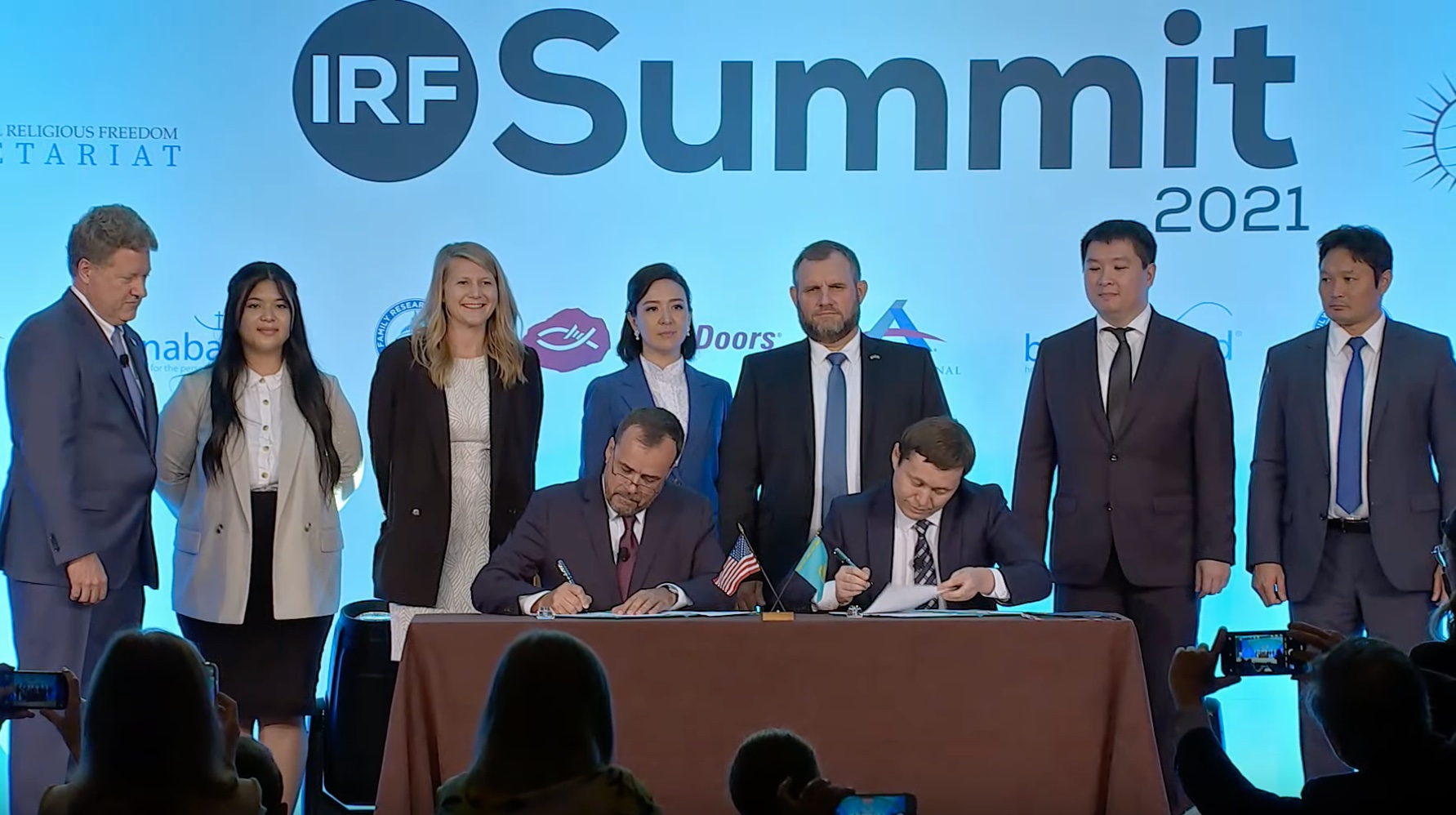 Love Your Neighbor Community (LYNC) is pleased to announce it signed a strategic Memorandum of Understanding (MOU) with the Government of Kazakhstan signaling a new era of building religious freedom in Central Asia. The historic MOU signing ceremony was held during the first-ever International Religious Freedom (IRF) Summit that took place from July 13-15 in Washington, DC. Witnessed by members of the United States and Kazakh governments, religious and civil society leaders, and members of the press, the MOU is the first of its kind between an American non-profit organization and the Kazakhstani government.

Wade Kusack, President of LYNC, together with Yerzhan Nukezhanov, the Chairman of the Committee for Religious Affairs of the Ministry of Information and Social Development of Kazakhstan, offered joint remarks highlighting the commitment of Kazakhstan to building religious freedom through the development of roundtable networks for religious, government and thought leaders as well as the Kazakhstani Government’s long-held initiatives to open dialogue between the more than 800 religious designations in the country.

“Today is a day of celebration for the relational developments across eleven years and the commitment of the Government of Kazakhstan to elevate itself as a leader in building religious freedom. This signing is a testament to a multi-year, multi-entity commitment to developing a framework which integrates [the tenets of] geopolitical discernment, respect of culture, and recognition of government and grassroots strides forward,” said Kusack in his opening remarks at the signing ceremony. “It is my personal belief these tenets have not only guided us to today but that these shared tenets are a beacon framework to be replicated across the Central Asia region.”

The ceremony is the culmination of eleven years of relational development commencing in 2010 when LYNC hosted inaugural meetings with religious communities in Kazakhstan. Influenced by Institute for Global Engagement and the IRF Roundtable, LYNC and the Kazakhstani government began an open and ongoing dialogue through the Embassy in Washington in 2013. The Government of Kazakhstan extended an invitation for Kusack to travel throughout the country in late 2013 to speak with leadership from all entities of the society. By early 2014, LYNC took its cue from national and local initiatives to begin developing a multi-sectoral network in Kazakhstan with the aim of listening for understanding to build religious freedom. In each meeting and relational investment across the next several years, LYNC and the Kazakh government continued to engage one another with cultural integrity and trust-building.

The strength of the LYNC-Kazakhstan partnership was highlighted this year in the USCIRF 2021 Report stating, “In 2020, religious freedom conditions in Kazakhstan continued to improve. The government remained committed to reforming its approach to religion in conversation with U.S. counterparts. . . . . . Other positive indicators in 2020 included the government hosting a religious freedom roundtable in the capital of Nur-Sultan early in the year, prior to the outbreak of COVID-19. The government also announced its intention to convene such meetings regularly across Kazakhstan in a joint effort between the Ministry of Social Development and Information and Love Your Neighbor Community (LYNC). . .”