TASHKENT (Uzbekistan) – A CELEBRATION OF THE 500TH ANNIVERSARY OF THE REFORMATION 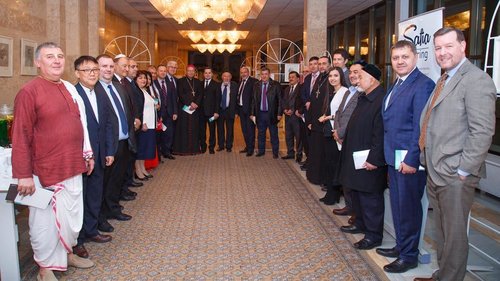 On November 27 2017, an interfaith celebration of the 500th Anniversary of the Reformation was held at the Russian Drama Theater of Tashkent, organized by the Bible Society of Uzbekistan and the Center of the Full Gospel Church.

Not only the concert program was breadth (the Turkiston Chamber Orchestra, the State Choir, and others performed), not only the compelling educational videos about the significance of the Reformation was created on the high professional level, but also the event show the wide range of participants and guests. Pastors and ministers from virtually all of the Evangelical churches of Uzbekistan came together in the 600-seat hall in the center of the city, and the special guests included representatives of state bodies, heads of embassies and ministers and clerics of other Christian denominations and religions. Ambassadors extraordinary and plenipotentiary (USA and Ukraine), representatives of foreign Biblical societies (Azerbaijan, Ukraine, Kazakhstan and Kyrgyzstan) and major Christian denominations (a bishop of the Catholic Church, vice-rector of the Orthodox Seminary and even a representative of the Islamic University) delivered congratulatory speeches on the occasion.

It is obvious that the reforms carried out by the state this year have impacted the sphere of the church in full measure. The open dialogue and respectful attitude of the ministers of churches and various denominations were exemplary for Central Asia.

One of the participants noted: “No matter who I spoke with after the celebration, I was not only encouraged on this night, I also came away with a sense that positive changes were underway and that we were entering a new chapter in the history of religious relations in Uzbekistan.”