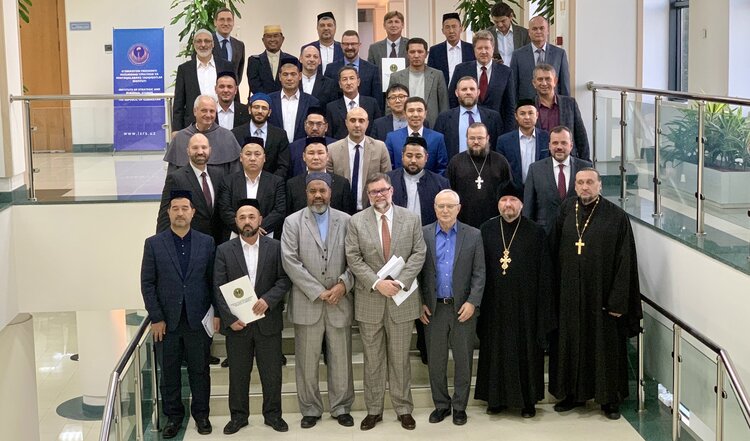 The impactful, sole work of LYNC (Love Your Neighbor Community) and MFNN (Multi-Faith Neighbors Network) is to build and foster relationships between faith groups. These relationships fulfil a vital need for engagement in order to build neighborhoods and cities that are more interconnected and resilient to hate and violence.

MFNN is the brainchild of Pastor Bob Roberts and Imam Mohamed Magid, two prominent American religious leaders representing thousands of Evangelical and Muslim congregants. Together, our organizations find themselves on the cutting edge of impact in Central Asia and specifically, Kazakhstan.

This holiday season, will you help us continue to develop our movement?

Our “multi-faith” approach acknowledges deep theological differences; not to demean or denigrate but to understand and respect the essence of one another’s identity. We have seen tremendous results from this model. In November of 2019, we witnessed the tremendous success of the LYNC-MFNN partnership in Uzbekistan (another Muslim majority country in Central Asia) where pastors and imams from various towns met for the first time during a multi-faith retreat hosted by the Uzbek government, and led by Pastor Roberts and Imam Magid.

Perhaps the most astonishing aspect of the retreat was the attendance of unregistered pastors from the town of Nukus. Due to the good will of the offices of the Uzbek ambassador to the U.S., these pastors were allowed to attend the retreat as private citizens. Their attendance and government sanction was unbelievable and enabled them to build relationships openly with their fellow neighbors, imams and pastors; which were for the first time treated and seen as equals.

Because of the retreat, these imams and pastors now have a new paradigm of mutual engagement, with theological permission to do so. They were so excited by this new model, they went out to dinner the very first night to begin planning how to deepen their relationships and serve their city. Through this engagement, it is believed that the pastors there will also be better integrated and protected.

In 2020, we are creating three retreats in three major cities in Kazakhstan – Nur-Sultan, Shymkent and Almaty. Each retreat invites faith leaders to a three day retreat where they will meet, hear lectures, and work in small groups. Over the three days, these leaders will be encouraged to make concrete plans at the end of the retreat to: 1) Have a meal in each other’s homes; 2) Gather each other’s congregations together for a common event; 3) Work together on a local project that serves the city where they live; 4) Stand up for one another if harassed for their faith; and 5) Build a like-minded network of rabbis, pastors and imams in the city, region, country and world.

YOU play a critical role in the story God is writing in this region, that will subsequently impact the entire world; right down to the cities and neighborhoods each of us lives in here in America.

We invite you to join us in our vision of religious freedom and safety in Central Asia to change the narrative of OUR world.

We thank you for your consideration & wish you a joyful, peace-filled Merry Christmas; and a happy holiday season!

Orchestrating an unprecedented meeting in July 2014, the Institute for Global Engagement invited a dozen Russian & Ukrainian pastors to a safe, neutral place in Istanbul. The dialogue between the two factions whose governments were in active military conflict was dynamic, each bringing their viewpoints with little resolution until the final day. As brothers in Christ sharing communion, one Ukrainian pastor named and isolated the thoughts of all: “We don’t know what to say, or what to do”… [because our faith has been reduced to Sundays and we don’t know how to relate to the geopolitical complexities of this war and humanitarian crisis.] With this knowledge, IGE together with Wade Kusack followed up with three additional peace and reconciliation meetings, adding practical service and humanitarian aid to the Theory of Change model. Two of the meetings occurred in Sloviansk, Ukraine, with dramatic and mind-changing results as described below.

In late 2014, ten Russian pastors nervously de-boarded a train at the Sloviansk, Ukraine, at the invitation of IGE partner Wade Kusack to meet of their Ukrainian brothers. Welcomed with a traditional visit to the sauna followed by a large dinner, the pastors, with their separate perspectives of the conflict gathered for the three-day program to develop a Biblical vision of reconciliation for Russia and Ukraine. Days one and two brought intense discussion as both groups were asked to prepare and then share a report of the roots of the political and humanitarian fallout between their countries. On day three, the pastors stepped out of the ideological and into the practical by traveling to the demarcation line at cities of Mar’inka and Krasnogorovka, where civilians live in great danger, with little food and no electricity or heat. Armed with the two hands, each other and humanitarian aid, the group spent the afternoon not only seeing the ravages of the war but also serving those in greatest need. The presence of the Spirit was palpable, leading one pastor of 20 years to remark, “this is the first time I have truly understood what the Church is.”

A turning point, the work of peace and reconciliation was finished by God the following morning in a church service. One of the Russian pastors went to the altar, publically asked the Father for forgiveness on behalf of the pain and suffering perpetuated by his country and then, joined by other Russian and Ukrainian pastors, asked God for forgiveness for both nations. It was a mind-changing weekend. Bringing hope, aid and mercy united the opposing groups. They became friends. At the same train station, the Russian pastors departed just three days as brothers once again and both groups making plans to continue alleviating suffering through tangible help and aid.

We were able to conduct 4 similar events where more than a hundred pastors from Russia and Ukraine participated. Many of the pastors have begun preaching on reconciliation in their churches and some started their own humanitarian missions to the parts of Ukraine affected by war. Most of all, the meetings expanded the dialogue on reconciliation in eastern Ukraine to include critical concepts such as religious freedom, refugees and trauma healing. 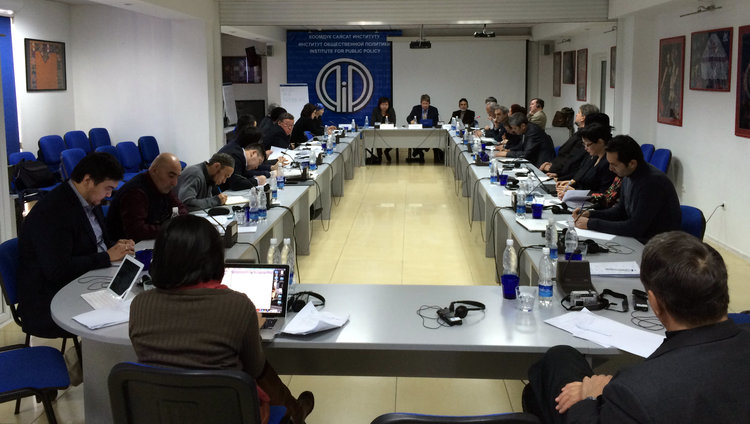 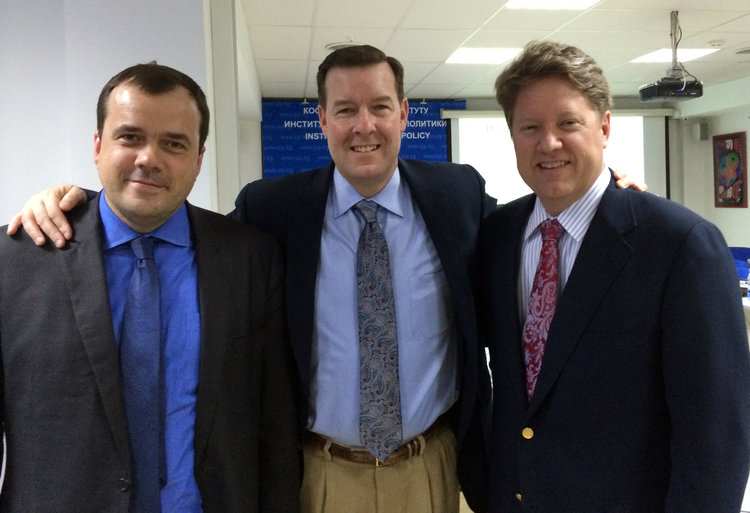 As apprehensions in Central Asia rise about the possibility of religiously-motivated instability resulting from the U.S.’ impending departure from Afghanistan, IGE and the Carnegie Endowment for International Peace have launched a series of conferences on religion, security and citizenship in Central Asia. The most recent conference was held in Bishkek, Kyrgyzstan, from 24-26 February and is the third conference in the series (the first was held in May 2013 in Astana, Kazakhstan, and the second conference in Almaty, Kazakhstan, in December 2013).The Bishkek conference focused on three critical themes: religion’s role in the construction of identity, religious education, and religion and family issues, including women and youth.

Participants hailed from Kazakhstan, Kyrgyzstan, Tajikistan, Uzbekistan, Russia, Afghanistan, India and the United States. The first day and a half of the conference focused on region-wide concerns, with 45 participants engaging in a lively discussion on the three foci of the series, as well as hearing perspectives from a panel of international experts. IGE president Chris Seiple delivered the keynote address which can be viewed online here. The conference ended with a discussion of practical next steps and policy recommendations.

The second half of the second day featured a special follow-on session devoted entirely to Kyrgyzstan, where 41 participants, including representatives of the Commission on Religious Affairs and the Office of the President of the Kyrgyz Republic, debated key topics such as the meaning of secularism and the role of the government in regulating religious institutions. During the session, the Kyrgyzstani government invited the International Religious Freedom NGO Roundtable to provide feedback on planned religious policies.

On 26 February, IGE and Carnegie led a roundtable that included Uzbeks, Kyrgyz and Russians in Osh, a city in southern Kyrgyzstan that was the site of ethnic violence in 2010 which left over 400 dead. Participants raised many of the same concerns that were discussed in Bishkek, such as the meaning of secularism, the role of the government in regulating religious groups, and the future of religious education.