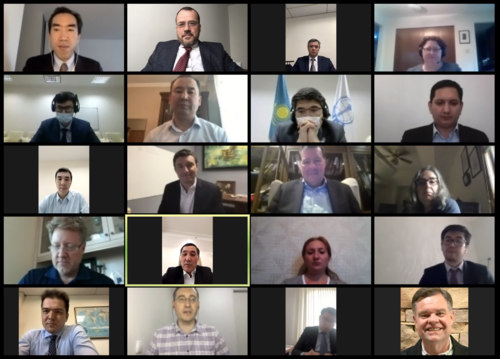 Recently, LYNC initiated a consultation with the Government of Kazakhstan introducing a coalition of American NGOsS formed to support the country’s commitment to expanding religious freedom through exercising covenantal pluralism. The coalition is rooted in years of relationship building by LYNC President and Founder, Wade Kusack, who began working in the region in 2013 through partnership with the Institute for Global Engagement (IGE). This year’s coalition announcement coincides with the launch of LYNC’s three-year project, “Developing Covenantal Pluralism in Modern Kazakhstani Society,” funded by Templeton Religion Trust.

“LYNC’s relational strength in Kazakhstan lays within our commitment to listening to the Government and civil society’s challenges in dialoguing with religious groups and then developing tailored solutions to those challenges,” said Wade Kusack, President of LYNC. “We continue to view cooperation not as short-terms gains but rather in long-term, sustainable investments into strengthening religious dialogue and freedom in the region, with Kazakhstan as the headquarters of a larger network and model of expertise. We are eager to continue expanding roundtables to nine Kazakh cities and invite high-level participants into the inaugural Religion and Rule of Law certificate program launching next year.”

Supporting LYNC’s commitment to the region’s development, each of the coalition’s invited NGOs — Multi-Faith Neighborhood Network (MFNN), Brigham Young University’s Center for Law and Religion Studies at the J. Reuben Law School, and the IRF Roundtable Secretariat — have developed relationships within their respective spheres of influence including government, religious leadership and civic society. Each coalition representative presented their role and contribution in the upcoming three-year Templeton Religion Trust-funded project led by LYNC and Mr. Kusack.

Opening the consultation formal introductions, President Emeritus of IGE and Templeton Religious Trust External Advisor Chris Sieple provided an evaluation of the partnership and congratulated the coalition for new opportunities for developing covenantal pluralism in Kazakhstan. Both LYNC and the represented leaders of the Kazakhstan government agreed the coalition was a vital next step in their progress forward.

“The future of Kazakhstan is one of peaceful societal cohesion and as we look into tomorrow, we acknowledge our partnership with this coalition serves as one more step to our success, “ said Mr. Anuar Khatiyev, Acting Chair of the Committee on Religious Affairs, Ministry of Information and Social Development of Kazakhstan. “We are resolute in helping lead these efforts with those represented here today and express our gratitude as partners working toward a common goal.”

Pastor Bob Roberts Jr., co-founder together with Imam Magid of the Multi-Faith Neighborhood Network, introduced the opportunity for cross-faith relationship building based on the Christian-Muslim retreat model the organization developed and implements worldwide. Pastor Roberts and Imam Magid traveled to Shymkent as members of the American delegation and participated in the LYNC-organized roundtable in 2019. Due in part to their deepening relationships with religious leaders in the region, Shymkent is included as a host city of the project-funded MFNN retreats.

Dr. Elizabeth Clark, Professor at the Brigham Young University’s Center for Law and Religion Studies at the J. Reuben Clark Law School, graciously agreed to help set up two certificate courses in Kazakhstan, in which high-level government officials and members of law enforcement will be invited to expand their knowledge on Religion & Rule of Law. This religious literacy course was birthed from conversations with the Kazakhstani Minister of Justice who publicly acknowledged suppression of peaceful religious minorities happens in many cases due to the lack of religious literacy of the local government officials and law enforcement. LYNC responded to this discussion by creating a partnership with BYU to address the desire for knowledge and training in Kazakhstan.

Greg Mitchell, Managing Co-Chair of the IRF Roundtable, introduced the opportunity to create a network of the religious freedom roundtables in Kazakhstan in connection with the global network, potentially establishing Kazakhstan as a headquarters for the Central Asia roundtable network. James Chen, Vice President of Global Operations at IGE, presenting the Theory of Change developed at IGE and explained how the same theory of change that LYNC tailored and practices in Kazakhstan works in countries worldwide.

Concluding the consultation, Dalel Ismagulov, Head of the United States Office, Department of America, Ministry of Foreign Affairs of the Government of Kazakhstan said, “It is clear today that this coalition is built on the strength of partnership and shared resolve. The Ministry of Foreign Affairs grants full support to this cooperation and we look forward to continuing our work together.” 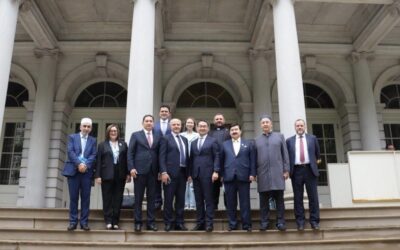