Building a strategic partnership to advance FoRB in Kazakhstan

The Kazahkstani people are looking for a way (bottom-up), and the government is looking for a way (top-down) and it feels like these two ways are beginning to merge,” said Evgeniy Zhovtis, Director of the International Bureau for Human Rights and the Rule of Law in Kazakhstan1, speaking at the conclusion of LYNC’s year long series of roundtables. This reflective statement by Mr. Zhovtis well illustrates the culmination of deposits of trust including roundtable participation between the Kazakh government, civil society and national, regional and local religious leadership.

On February 27, 2020, LYNC hosted the concluding roundtable in Nur-Sultan. Representatives from the three previous roundtable locations- Shymkent, Ust-Kamenogorsk and Aktobe- were in attendance as well as government ministers, religious heads, and other high-ranking officials operating from the capital. Participants actively discussed what needed to be included in the draft of Memorandum of Understanding (MOU) based on their respective professional experience, the expert models shared at the roundtables, and the next steps needed to create effective dialogue going forward. The MOU is anticipated to be signed at the 2020 Department of State Ministerial in July.

Kazakhstani leaders across government, civic society and religion indicated the need for continued structural support for religious dialogue occurring across the country. Specifically, LYNC seeks to bolster and strengthen the existing and developing relationships through the creation of roundtables and working groups throughout regions, expanded training on international models of reconciliation and relationship-building and a Religion and the Rule of Law certificate program for departments of national government and religious community leaders asking for additional instructional support. LYNC is pursuing a three-year proposal to provide these ongoing support mechanisms as the Kazakhstani walk forward in ownership of the MOU and its implementation.

LYNC is resolute in fulfilling its promise to return to Kazakhstan and finish what was initiated and achieved thus far. Now is the time to continue the working combination of the bottom-up of grassroots believers seeking to understand each other better and contribute to society and the top-down of government officials wrestling with how to govern a very traditional society. Both the roundtables outcomes and forward-looking programs have the full support of the government2, LYNC and its partners as well as all registered and unregistered religious groups operating in Kazakhstan.

The Templeton Religious Trust funded series of roundtables in Kazakhstan engaged the highest level officials in central and regional government, influencers of civil society and majority, minority and unregistered religious groups- including Ahmadi Muslims, Krishna Society, and Scientologists. Invitations were issued to the later groups by the Kazakhstani government who offered their full support in organization, participation and follow-up.

Hosted in November 2019 in the three cities of Shymkent, Ust-Kamenogorsk and Aktobe, roundtable participants heard from international experts on topics including: Religion and the Rule of Law (Dr. Chris Sieple), Relationship Building in Multi-Faith Contexts (Dr. Bob Roberts & Imam Mohamed Majid), and structure and goals of Religion Freedom Roundtable (Mr. Greg Mitchell). Integrated into all models was a top-down (including high-level central and regional government participants) and a bottom-up (including unregistered religious minorities) approach to building relationships across all sectors of the society.

Following presentations of the international models, time was designated for attendees to discuss the application and usefulness of the models to Kazakhstani current affairs. Strong, positive feedback was provided by the majority of attendees who wished to practically move toward the drafting of the MOU. A key discussion point of note was how Kazakhstan can be a model for religious freedom reform and creating a safer, more open society, and inspire positive competition in Central Asia. 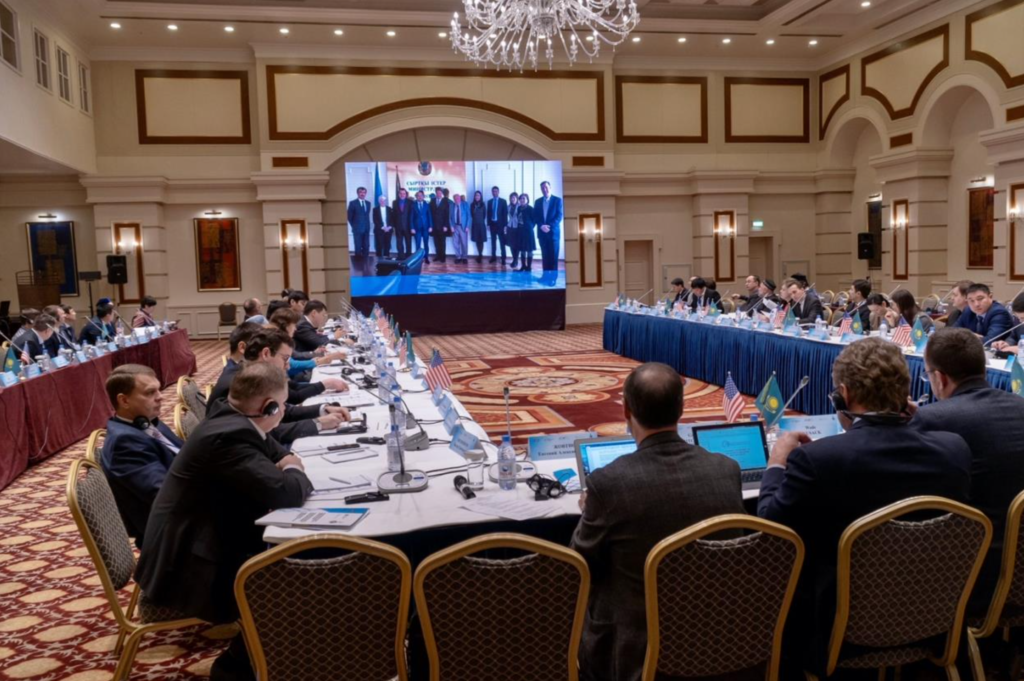 LYNC hosted the final roundtable of the first series “Building a Strategic Partnership to Advance Religious Freedom” in Nur-Sultan on February 27, 2020. Government representatives, religious communities, and civil society, as well as OSCE and diplomatic corps members (including Carly Cohen, Political Officer, U.S. Embassy), were in attendance3. The Extraordinary and Plenipotentiary Ambassador of the Republic of Poland, Ph.D., Professor Selim Hazbievich; the Head of the OSCE Office in Nur Sultan Ambassador György Szabó; and the Kazakhstan’ Vice Minister of Information and Social Development Marat Azilkhanov made welcoming remarks and provided keen points to deepen the conversations.

Significantly, participants engaged in corporately reading aloud the draft MOU and Roadmap. The floor was opened for detailed discussion of the provisions at which time local contextual points were added or amended in the draft. Participants owned both the process and the product, willingly offering their contextual knowledge. During these discussions, the need arose for a practical toolkit for implementation. LYNC responded with a commitment to draw upon its own best practices in both Kazakhstan and Uzbekistan to develop a toolkit entitled “How To Start & Run Ongoing Religious Freedom Roundtables & Working Groups.”

In conclusion, the 2019 LYNC-Kazakhstan partnership realized three key successes. First, through the international experts, LYNC retained as roundtable speakers, three of the best practices in advancing religious freedom in the world were presented to highly motivated, highly engaged national officials and leaders. Second, as reported on the anonymous questionnaires, the LYNC-Kazakhstan relationship received overwhelming support for the future implementation of these three best practices in Kazakhstan. All indicators revealed a willing attitude toward meaningful and strategic dialogues across the sectors in Kazakhstan. Third, a significant milestone was the ownership approach in the creation of the MOU and Roadmap. Attendees discussed the provisions and action plans, listened to recommendations, and then approved the draft.

1 The most prominent non profit, non government organization to defend the human rights in Kazakhstan. https://bureau.kz/en/

2 See attached letters from the Kazakhstani Embassy to the US, and the Minister of Foreign Affairs