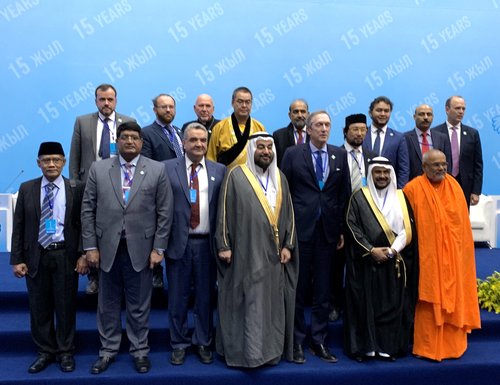 The president for LYN Community Mr. Kusack was invited by the Kazakh Embassy in Washington, D.C., to participate in the VI Congress of the Leaders of World and Traditional Religions. Congress is primarily comprised of leaders of the most prominent Muslim sects, Buddhists, Judoists, and some Christian denominations. Amongst those were represented, it is important to note a degree of unification on the topics of peace and tolerance. One on the achievements was the open dialogue on these topics between the Iranian Ayatollah and Jerusalem’s Rabbi, both seated behind the same table.

A common thread in participant conversations and presentations was the importance of tolerance as perpetuated by mutual respect and “religious literacy.” It was agreed that these three ideological signposts were necessary in reaching peace and de-radicalizing groups. To the point, Chairman of Russia’s Mufti’s, Mufti Sheikh Ravil Gaynutdin noted: “Multi-faith dialogue is a real practice of peace, demanding moral heroism from its participants. Each of the religious leaders presented here is convinced of the exceptional rightness of their own faith and the exclusive right of others to the same conviction. This is spiritual maturity.”